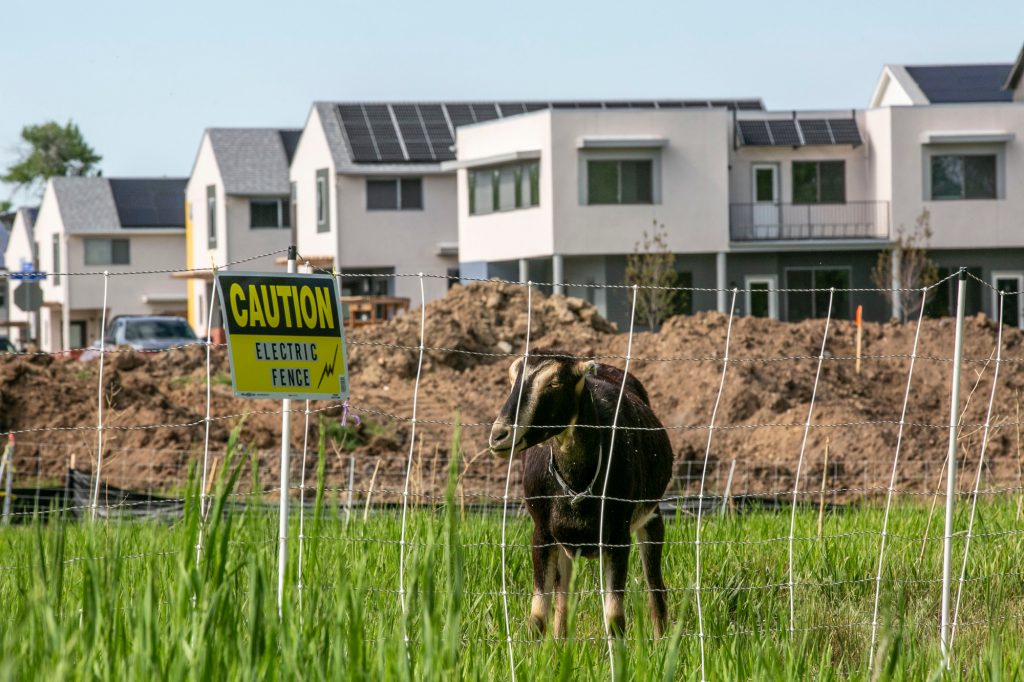 In the booming suburbs north of Denver, Norbert Klebl has built a different sort of development.

The Geos Neighborhood packs dense, energy-smart homes against a forested creek in Arvada. Some of its green design elements are obvious. Unlike hulking mansions nearby, the units are long and narrow, so large windows can soak up winter sunshine. Each roof boasts a solar array. A herd of goats even grazes a shared open space.

Less noticeable is the complete lack of natural gas hookups. Klebl smiled as he opened the door to the utility closet in his townhome. Inside is an all-electric climate control system, which the Austrian-born engineer designed and perfected himself.

“Gas should be stopped in new developments,” Klebl said. “We have to learn to live in fully electric homes.”

Many energy experts have come to a similar conclusion. To meet international climate goals, a recent International Energy Agency report found almost all gas appliances must be replaced with electric alternatives. The thinking is electric stoves and water heaters can take advantage of renewable energy. Without rapid development of technologies like “renewable natural gas,” anything with a burner tip guarantees emissions.

Klebl said the Geos Neighborhood shows the transition is possible, but some recent events at the housing project show it won’t be easy. A divorce forced Klebl to sell the 25-acre site last year, where he has only built 28 of 282 planned homes.

The new developer has committed to carry out Klebl’s vision with one major exception. Despite objections from residents, the remaining units will likely include natural gas hookups.

Jim Horan, a retired full cell researcher who lives in the Geos Neighborhood, said the concerns about natural gas hookups started after another resident spotted a worker with Xcel Energy. A conversation revealed the utility was looking for the best place to bring in gas lines.

Residents and Klebl quickly sought answers from the new developer.

A group of residents wrote Ellington a letter last May to express their frustration. In correspondence shared with CPR News, Ellington explained he had conducted an “exhaustive process” to survey the market for home builders. All required natural gas to be part of the development.

He also noted the addition would not violate the design book used for the initial block of homes, which he had committed to follow. While it said the neighborhood should aspire to avoid fossil fuels, nothing in the standards forbids natural gas lines.

“The very passionate existing residents were apparently misled by the prior developer about what are ‘requirements’ vs. ‘goals,” Ellington later wrote in an email to CPR News.

Ellington added Dream Finders, a major national homebuilder, had been selected to build the remaining homes. Matt Childers, a vice president for the company’s Colorado division, declined to explain why the company had insisted on natural gas service but said it would include other green-building elements like solar panels and south-facing windows.

Many of the residents aren’t convinced all builders would require new natural gas hookups. In the last few weeks, they have pushed Ellington to consider some smaller local home builders, but he said those companies lack the “financial capacity” to take on the project.

The demand for natural gas doesn’t come as a surprise to other local homebuilders. Pat Hamill, the CEO of Oakwood Homes, said his job is to satisfy the desires of prospective homebuyers. At the moment, most people don’t want all-electric homes.

“The preference for gas appliances, like cooktops and grills, is overwhelming,” Hammill said. “If there’s a cook in the family, guess what they want?”

The assessment comes as the U.S. and Colorado are experiencing a housing boom. U.S. Census data show new construction shot up during the COVID-19 pandemic and has stayed high as the economy recovers. In April, permits for new houses were 61 percent higher than over the same period last year. New construction was up 67 percent.

Christian Oggel, a physician’s assistant who lives in the Geos Neighborhood, said he understands the housing industry will build homes people want. He just thinks builders have under-estimated the appeal of modern electric appliances.

“People think it’s all sort of a sacrifice,” Oggel said. “Climate change is giving things up and you can’t have everything you want, but it’s frankly a little bit more like a premium product.”

One example is the induction stove inside his kitchen. Since it uses magnetic resistance to create heat, the top is smooth glass rather than glowing metal spirals. Oggel boiled a cup of water in less than a minute. Afterward, he quickly cleaned the surface with a dishtowel.

“The induction stove is like a million times better,” he said. “Just faster and better in every way.”

While many electric appliances cost more than gas alternatives, Oggel said his rooftop solar panels offset his energy costs, which bring his utility bill down to about $10 a month.

Those kinds of cost calculations could be key to any shift toward electrical appliances. Ari Matusiak, the CEO of Rewiring America, a think tank and advocacy group in Washington, D.C., said most people don’t care what fuels heat their home or hot water, so long as it works and doesn’t break the bank. That’s why his group is pushing to make sure new incentives are part of any upcoming federal infrastructure package.

Matusiak thinks people will start to replace their gas appliances with electric alternatives if upfront costs can be brought down. As people get used to induction stoves and heat pump water heaters, Matusiak said they might even demand them in new homes.

But Dar-Lon Chang, a Geos resident, said his commitment to electric homes goes beyond cold economics. In 2019, he quit an engineering job at ExxonMobil after realizing the company was slow to shifting into renewable energy. He moved his family from Texas to Geos soon afterward. He said the Geos Neighborhood has let him bring up his daughter in a community “rising to the challenge of climate change.”

As Chang sees it, the commitment to all-electric homes is a vital part of the effort. If new homes do include gas, he fears it won’t just harm the climate. It will divide the neighborhood.

“I did not sign up to come here and have the developer go back on this vision,” Chang said.

This website uses cookies to improve your experience while you navigate through the website. Out of these, the cookies that are categorized as necessary are stored on your browser as they are essential for the working of basic functionalities of the website. We also use third-party cookies that help us analyze and understand how you use this website. These cookies will be stored in your browser only with your consent. You also have the option to opt-out of these cookies. But opting out of some of these cookies may affect your browsing experience.
Necessary Always Enabled

Performance cookies are used to understand and analyze the key performance indexes of the website which helps in delivering a better user experience for the visitors.

Analytical cookies are used to understand how visitors interact with the website. These cookies help provide information on metrics the number of visitors, bounce rate, traffic source, etc.

Advertisement cookies are used to provide visitors with relevant ads and marketing campaigns. These cookies track visitors across websites and collect information to provide customized ads.

Other uncategorized cookies are those that are being analyzed and have not been classified into a category as yet.