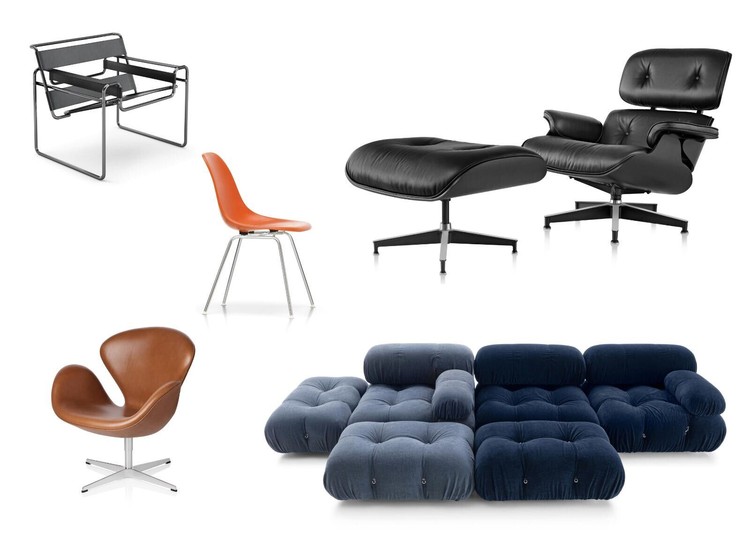 In a way, classic furniture is like a mixture between a work of art and a gold bar: it is a safe investment and can often even increase in value with age. In our second selection of design icons from the 20th century, we present Ray and Charles Eames, Marcel Breuer, Arne Jacobsen and Mario Bellini and some furniture pieces from the past century that remain more modern today than ever, in terms of not only design but also comfort. Find out more on the Architonic Platform.

‘Any time one or more things are consciously put together in a way that they can accomplish something better than they could have accomplished individually, this is an act of design,’ said American designer and architect Charles Eames (1907-1978). The quote is an apt one in relation to his Plastic Chair, which he first presented in 1948 as part of the MoMa’s ‘Low-Cost Furniture Design’ competition together with his life partner, Ray (1912-1988). The chair with its one-piece fibreglass seat shell was launched on the market in 1950 and was the first-ever plastic chair to be produced in series.

For me, it remains the chair – and was my first design classic purchase. That was in 2016, the same year that Vitra – the company that manufactures the chair today – adjusted the seat height to better match contemporary tables by raising the frame 20 mm. I was able to choose between the two versions, which was, looking back, a privilege, since today only the adapted size is available. I remember it being a difficult choice, but to be honest, I’ve actually forgotten which I chose in the end. At least as well known, though far removed from the Plastic Chair in terms of price, is the duo’s Lounge Chair, developed in 1956 as a contemporary update of the classic English club chair. And that it is: more modern, more comfortable, more elegant and also lighter. Today, it is manufactured by two companies, in Europe by Vitra and in the USA by Herman Miller. Nowadays, the Eames are known for more than just their 20th-century design classics. In early June, sports label Reebok launched a collaborative footwear collection with Eames Office under the motto ‘Mid-century design meets retro ’80s Reebok style’ – the first-ever collaboration of the two brands. So an Eames for wearing rather than sitting on.

In 1925, at just 23 years old, Hungarian-born modernist architect and furniture designer Marcel Breuer (1902-1981) was appointed workshop manager at the Bauhaus Dessau. Supposedly inspired by a bicycle handlebar, it was here that he began his first experiments with tubular steel – which would result in, among other things, the legendary Wassily Chair, today produced by Knoll International. Initially titled B3, the minimalist armchair was later renamed after the artist – and Breuer‘s Bauhaus colleague – Wassily Kandinsky, for whose living room he developed the chair. And the Wassily Chair perfectly embodies the Bauhaus idea of democratic design: suitable for mass production, lightweight and stable. Together with the Cesca Chair (also know as the S 32 and produced by Thonet since the early 1930s) designed in 1928 – also consisting of a tubular steel frame, but with a seat and backrest made of Viennese wicker – it was named one of the most important pieces of furniture of the 20th century by the New York Times.

From 1937 to 1941, he taught at Harvard University in Cambridge, Massachusetts, like his teacher Walter Gropius. And from his teachings were to emerge great American architects of modernism, such as the architect Paul Rudolph. Breuer is also considered a pioneer of the International Style, thanks to his use of glass and steel at the beginning of his architectural career. He later moved in the direction of concrete and brutalism. Away from private homes and from the lightness of Bauhaus, away from the cantilever and International Style. He developed into an architect who would focus predominantly on concrete and architecture that evolved towards a cubist-like formal language, which is considered his trademark.

A connection between Arne Jacobsen (1902-71) the product designer, architect and pioneer of International Functionalism, and filmmaker Stanley Kubrick is perhaps not immediately apparent, but Jacobsen‘s AJ cutlery series – the so-called ‘cutlery without frills’ collection – designed for the SAS Hotel in Copenhagen played a role in Kubrick’s 1968 film 2001: A Space Odyssey. Jacobsen‘s work on the SAS Hotel – where he not only designed the architecture of the hotel but also the interiors right down to the carpets, cutlery and ashtrays – resulted in other and probably more famous designs, including the Drop™, the Egg™ and the Swan™ Chairs, all still produced, as then, by Fritz Hansen. His collaboration with the Danish furniture manufacturer, as well as with the Danish lighting brand Louis Poulsen, began in the 1930s.

The master of Danish modernism was notoriously difficult when it came to collaboration, but also a loving family man and a lover of nature, who painted and studied nature. With his iconic forms, the architect and representative of European Functionalism, Jacobsen left behind a rich oeuvre of designs that are as modern today as they were when they were created. Original designs by Jacobsen fetch high prices at auctions these days.

Last but not last, and still alive today: Mario Bellini. Born in 1935, the architect and designer has won the Compasso D’Oro no fewer than 8 times. In 2004, he received the Gold Medal award from the Italian President himself, for his contribution to the worldwide promotion of architecture and design. A good example of his work for which he has received so many awards is the Camaleonda sofa designed for B&B Italia. The sofa was first launched in 1970 and was given an update in 2020, 50 years after it first appeared. It is now produced according to modern standards of sustainability with a structure that resembles a sandwich whose dismountable layers are made of recycled and reusable materials.

Bellini, who graduated from Milan’s Polytechnic Faculty of Architecture in 1959 and studied under luminaries such as Gio Ponti, also worked for six years from the mid-1980s as an editor for domus, the iconic Italian architecture magazine. Among the producers of his designs, in addition to B&B Italia, are brands such as Cassina, Vitra, typewriter manufacturer Olivetti, Yamaha and Renault. He worked for these companies as a design consultant between 1978 and 1982. In 1987, he was honoured with a retrospective at the Museum of Modern Arts in New York. In addition, many of his designs are now in the permanent collection of MoMa as well as other renowned museums around the world. All that remains is to say – Chapeau Monsieur Bellini.