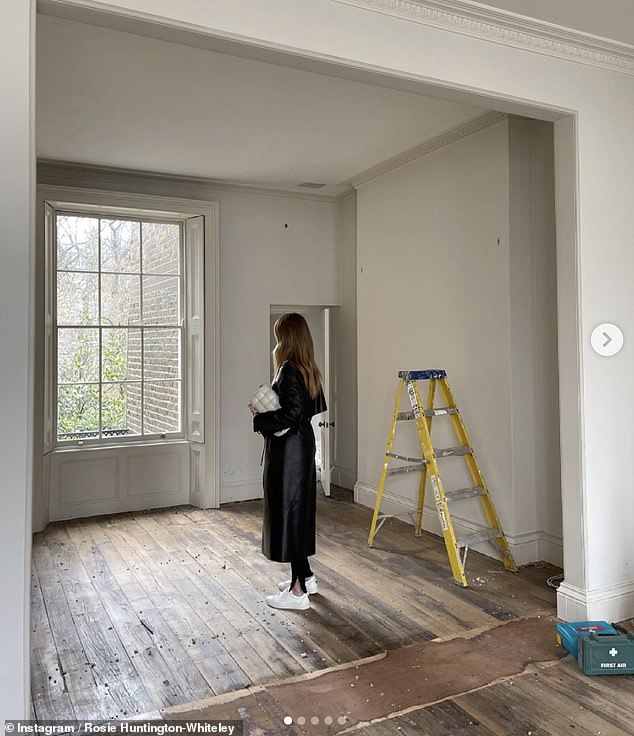 She’s known for her elegant sense of style.

And Rosie Huntington-Whiteley proved she’s also got a keen eye for interior design as she gave fans a glimpse into her very chic home renovations on Wednesday.

The model, 34, who is thought to have recently purchased a £7.5m home in London, shared snaps of a luxury bathroom design and floor samples to Instagram.

In progress: Rosie Huntington-Whiteley, who is thought to have recently bought a £7.5m pad in London, gave fans a glimpse into her very chic home renovations on Instagram on Wednesday

The blonde beauty could be seen standing in one light and airy room which boasted a sash large window and wooden flooring.

Renovations were clearly underway, with a yellow ladder standing beside one wall and some of the flooring ripped up beneath an archway leading to another space.

Rosie also shared an image showing several printed pictures of a stunning bathroom design, which featured a statement tub against one wall, stuck on a white brick wall.

Pin boards sat under these, with multiple pieces of paper covered in plans and ideas for the mother-of-one’s latest design project. 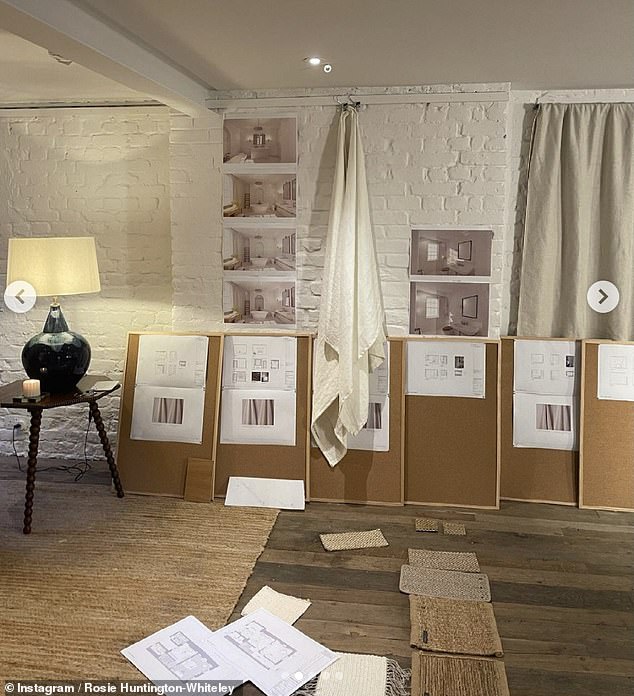 Planning stage: The model, 34, revealed several printed pictures of a stunning bathroom design, which featured a statement tub against one wall, stuck on a white brick wall

Loving it: Rosie gushed that she was ‘designing my dreams’ in the caption to her snaps

Proving to be the real designer, Rosie also showed her fans a selection of flooring samples with a variety of textures in consideration for the room.

Rosie seemed to be set on keeping neutral tones throughout the space, including lots of soft wood and white marble materials in her considerations.

The model has long had a penchant for interior design, regularly sharing snaps of her own impressive room set-ups as well as place she visits.

She and her beau Jason Statham, 53, had recently been staying in America and were pictured enjoying dinner out in Beverley Hills at the end of May. 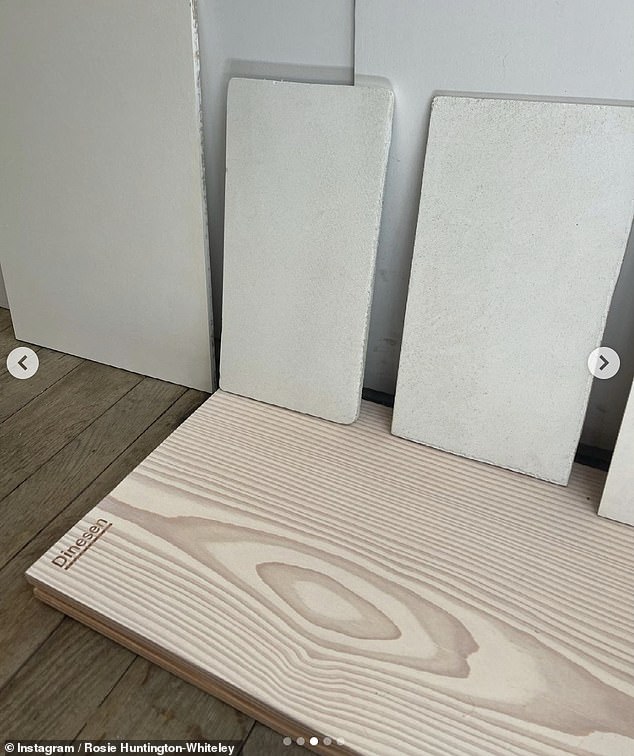 Stylish: Rosie seemed to be set on keeping neutral tones throughout the space, including lots of soft wood and white marble materials in her considerations 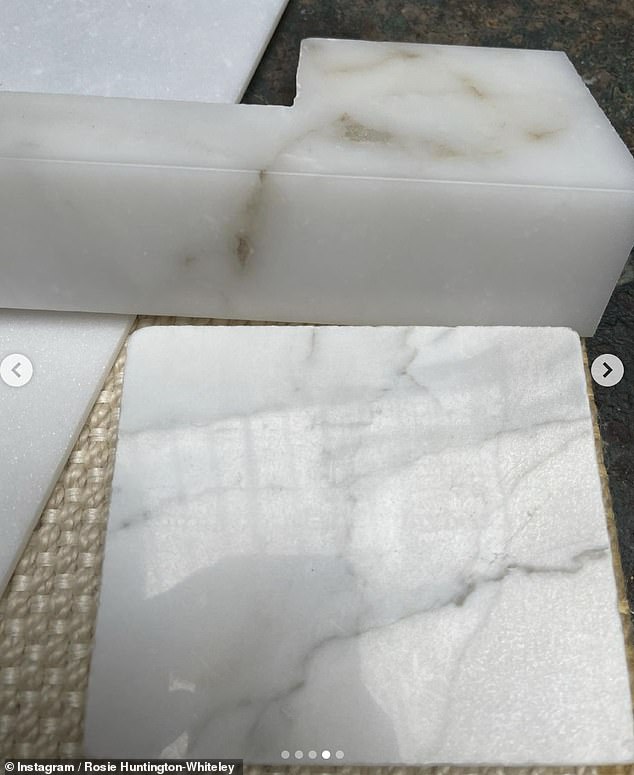 Good picks: She included a few marble samples alongside the light carpet in her deliberations

Rosie did not include the location of her latest design project in her Instagram post, however the couple said to have splashed out on a £7.5m property in the Chelsea area of London, in recent weeks, The Sun reported.

A source told the publication: ‘In the midst of a pandemic, both Jason and Rosie just want to be closer to home, closer to their families and UK friends.

‘After months of house-hunting, they finally found their dream pad – and couldn’t be happier.’

Rosie and Jason, who share three-year-old son Jack, were seen enjoying the English capital back in April when she hopped on the back of his electric bike for a ride. 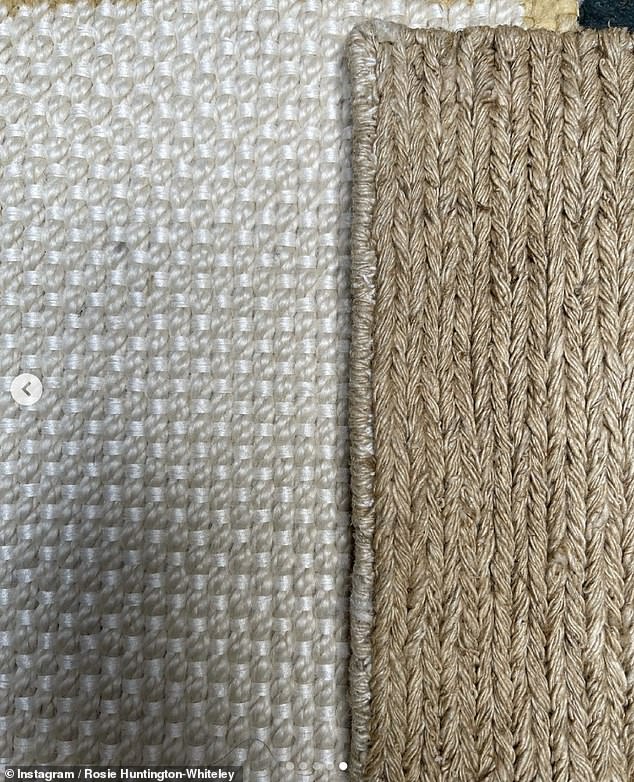 Textures: The blonde beauty seemed to be deciding between a cream checked pattern or a darker woven design for her floors

The couple sold their £14million Malibu beach house in 2020, after first putting the property on the market for a whopping £15.5million in October 2019.

Jason originally bought the 3,909 square foot home back in 2009, one year before he sparked up a romance with his fiancée Rosie.

The former Victoria’s Secret Angel has been in a long-term relationship with Jason since 2010 and they welcomed son Jack, three, into the world in June 2017.

Rosie’s designing endeavours come after the stunning model opened up to her Instagram followers in a rare Q&A in April.

Her followers asked everything from her ‘favourite thing about being a mother,’ to whether or not she would consider making a cameo in her fiancé Jason’s films after acting as Splendid in Mad Max Fury Road. 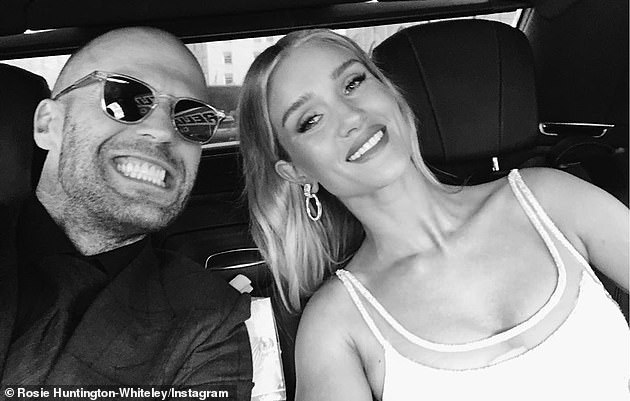 Happy couple: Rosie and Jason Statham, shown in 2019 on Instagram, started dating in 2010 and have been engaged since January 2016

She also revealed that she adores it when their son Jack, three, hugs her and says ‘I love you mama,’ and that although she has no plans to appear in the Fast & Furious franchise maybe their ‘little guy might!’

When asked her favourite thing about her fiancé she gushed: ‘He’s an amazing hands on Daddy.

‘A supportive and protective partner and he’s pretty funny too,’ but she did later add that she thinks she has him beat in the humour department.

When asked about she and Jason’s height difference she replied: ‘I am definitely longer than him with heels on… it’s been 11 years so I’m pretty sure he feels good about it.’

She also revealed that she has been thinking about doing a clothing line, writing: ‘It’s definitely something I’m exploring…but I’m a perfectionist so I’d have to do it right.’ 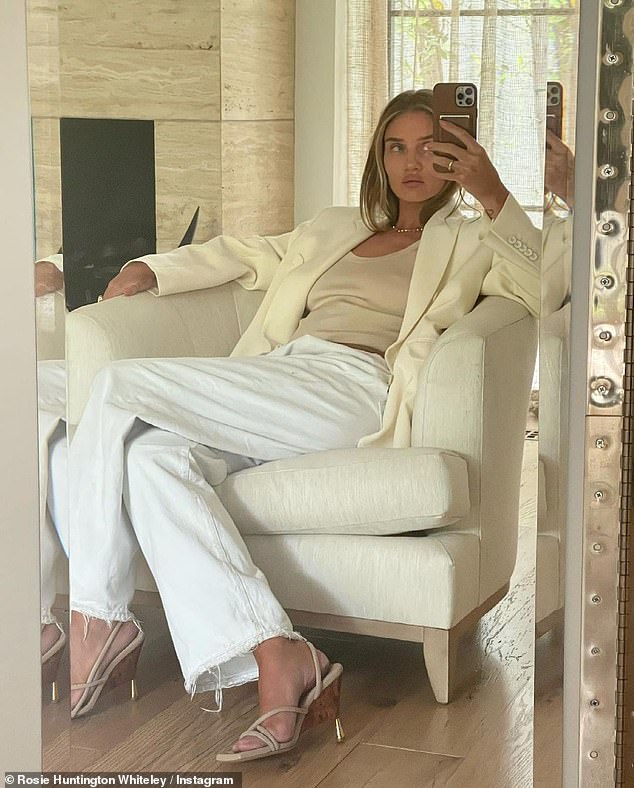 Glamorous: Rosie Huntington-Whiteley put on a stylish display as she posed in a cream tank top and white flared jeans for stunning snaps she shared via Instagram on Wednesday