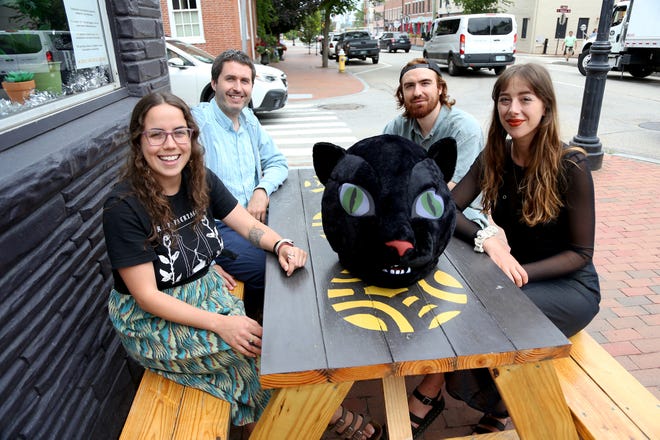 PORTSMOUTH — What happens when a writer, a tarot card reader, a producer and a baker walk into Prescott Park?

There’s no punchline to follow, only a shared desire to expand Portsmouth’s creative community and offer spaces for multiple mediums to flourish.

A mission statement for the group lays out intent, calling its co-founders and future members of the Guild “a group of friends, a collective of artists, and a platform to amplify one another’s creative work.”

“The goal of the Freaks and Artists Guild is to provide resources and community for creative folks in the Seacoast,” the mission statement reads. “Offering workshops, events, and peer support the Guild seeks to be a home for inspiration and connection- and a place to simply BE.”

The group of four first met at the Book & Bar in downtown Portsmouth two summers ago. Onosko said the group originated during the early days of the COVID-19 stay-at-home order, evolving into Zoom meetings to float ideas around before the group held its first public meeting at Prescott Park on Tuesday, June 29. About 15 people showed up, surpassing group expectations and adding new individuals into the mix, including an herbalist, a humorist, a cyclist and a weaver.

Besides dreaming up the potential for what the group could offer to local artists and creatives, the public meeting held discussions about finding a permanent location to house their physical art, hold workshops and host performances.

“The idea is that we want to have a space where everyone can share their networks,” Onosko said.

A top goal for the foursome is finding a brick and mortar space to rent that would be the Guild’s home, a to-do list item that Johnson said they’re hoping to have squared away possibly by the fall.

Sheridan has her sights on a place where there could be a community kitchen, couches and co-working spaces that artists and Guild members can utilize for their individual trade or artistic businesses.

“There is a model for makerspaces already (and) we have one in Portsmouth and that’s a wonderful thing, but I feel like our vision, it’s more like a social club,” she said.

“Our goal is like a membership type of thing where anyone who’s a member can come and put their artwork on the walls, they can create their own workshops that we will host in the space, that they can invite whoever they want to, make their own money, teach their own trade,” Johnson added. “Providing just a space for people to meet and share their knowledge so that our community becomes stronger together by learning from each other.”

In the meantime, the Guild has been granted temporary space downtown, and the group already has plans to open its doors to the public and showcase what their vision entails.

An eccentric flyer with refrigerator magnet-looking lettering hangs on the doors of 107 State St., advertising the first large event hosted by the Freaks and Artists Guild – a variety show.

From 7 to 10 p.m. on Friday, July 16, local musical acts will take the stage as well as a comedian, with work from five or six local artists hanging on the walls and Sheridan doing tarot card readings, at the Guild’s inaugural venture. The paintings on the walls of the upstairs lounge, complete with a bar, will be for sale, alongside the notecards, clothing, earrings and stickers other local artists have produced and are bringing to the event.

Sheridan added she’ll likely be wearing the costume head of a large black cat, a favorite accessory of the group with probing eyes that looks like it was taken right off the set of “The Masked Singer.”

“We want it to feel like an experience,” she said.

Where is the show and popup art installation being held? Above Mr. Kim’s restaurant in the former Red Door nightlife lounge that was once a popular hangout for budding young adults on the Seacoast, currently vacant and prime for use.

Onosko, an employee of the restaurant owned by Gary Kim, said they owe it to Kim for allowing them to take over the space for a short time as they find a space of their own to rent.

“We’re working to make this event as fun as possible,” Onosko said. “And if it’s a success, which we think it will be, we’re looking forward to maybe having our residency there to have ongoing, continued events while we also work toward our goals of having a makerspace eventually.”

Kim expects a great turnout for the Guild’s show and is happy to help jolt a sense of energy back into the community through local art after the difficulties that have arisen in the past 15 months.

“I think that there’s some really great momentum behind it,” he said, adding, “I want to help them succeed.”

The suggested cover for the show is $5 or $10, and the group is planning on affordable membership fees for those who are looking to join the Guild and form the larger community they’re fantasizing about.

Specific artistic areas of focus usually define local arts organizations which, in turn, Deck said, can sometimes be limiting to creatives who don’t always fit the mold of that organization. The Freaks and Artists Guild is setting out to be the antidote to any artistic limitations some feel when looking for opportunities to improve or display their work.

“And that’s what’s exciting too about creating a space that can bring together people from different types of creative arts and creative communities is to have some cross-pollination and the opportunity to be inspired by each other,” he said.