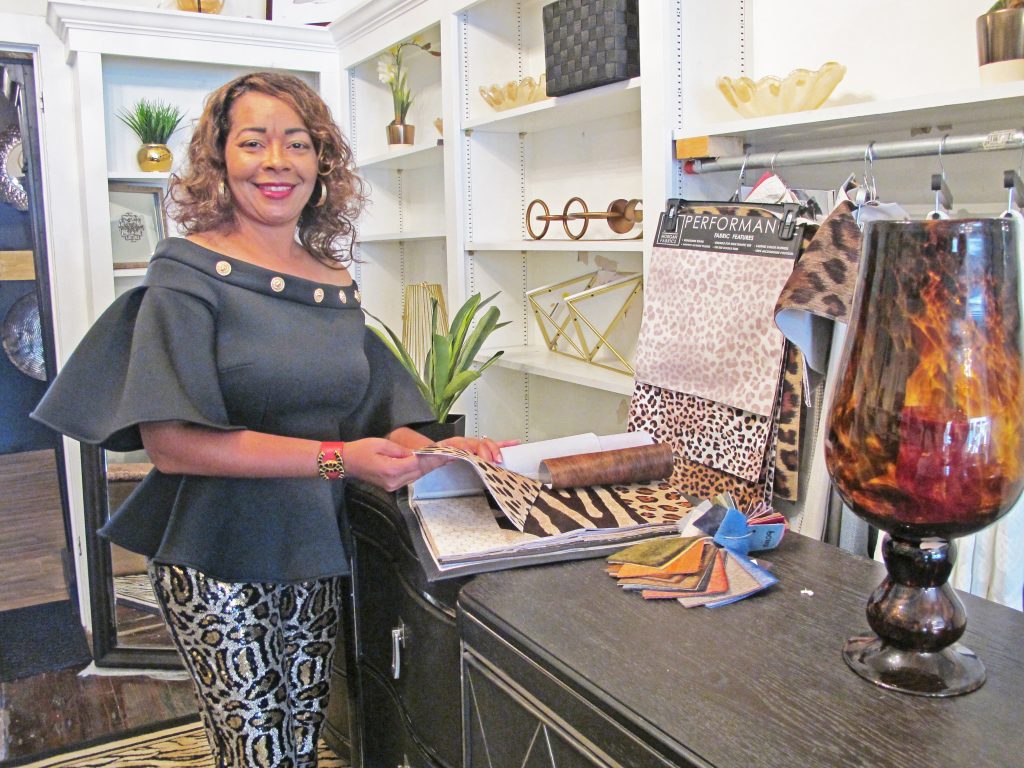 RIDGEWAY – Lavern Prioleau Glover has a theory about God-given gifts: When you follow your calling to put them to use, doors open in ways that will amaze you.

When, after many years of treating her passion – interior
design – as a side gig, she decided to make the leap and turn it into her
full-time job in her hometown of Ridgeway, she says so many things just fell
into place.

“I’m about 30 minutes from downtown Columbia, I’m about 30
minutes from Rock Hill, and I’m right in the back door of Blythewood,” says
Glover, whose Palmer Street storefront officially opened June 24. “And that’s
just where I want to be.”

Her business is called Glover & Glover Interiors and
Home Furnishings. She sells furniture and décor accessories and operates a
full-service interior design business.

That means she works with contractors to do the kind of
transformative projects that people see on home renovation TV shows – and she
also does much smaller-scale projects, creating a fresh look for homes where
the owner isn’t looking to knock down walls.

Interior design, she says, is something she’s done for the
last 30 years. Alongside a career with the state highway department. Alongside
raising her children. With a longtime friend and on her own. At times she
worked out of her home, for years in a rented warehouse space, and for a brief
time years ago at a storefront in Blythewood, which proved too much to balance
with a full-time job.

Over the decades, she says, she’s built up a loyal customer
base, often decorating several successive homes for a client – or re-doing the
same home with new décor every few years.

After graduating from the University of South Carolina with
a degree in business, Glover went to work for the highway department in roles
that made use of her college education.

It wasn’t until she was married with a small child, and had
just paid an interior designer a large sum for a window treatment, that the
wheels started turning in her mind. She had an idea, so she called a longtime
friend, Shirley Durham, for help.

“I took apart the window treatment that I had just paid $600
for and made a pattern from it, then we put it back the same way it was.”

The next time she received an order for a window treatment,
they did the same thing.

“And from there, L&S Design – Lavern and Shirley – was
born.

After Glover retired from her state job in 2018, she soon
began looking for space in Ridgeway, her hometown, to pursue her design dream.

Then came her break. Her dad, longtime Ridgeway town
councilman Donald Prioleau, called Glover to say Tina Johnson was closing her
Ridgeway boutique, Over the Top, and was about to put the building up for sale.
It was a perfect fit.

Her family and community, she says, continue to be a
foundation of her success.

Glover’s shop sells furniture and décor accessories, and
some level of service comes with all of them. She says it’s amazing sometimes
what difference the slightest touch – such as new pillows – can make to a room.

“I meet people where they are,” she says – whether they’re
looking for a complete overhaul or are simply looking to make their home more
comfortable on a budget

“No matter who you are and no matter what your economic
status was in Ridgeway, there was one thing that we all had in common – we were
all a small, close-knit community of family, and that’s why I’m proud to be in
downtown Ridgeway,” she says.

She currently has a website under development, and she says
her long-term goal is to reach people all over the United States. Her shop in
Ridgeway is open Thursdays, Fridays, and Saturdays by appointment or, she says,
“if I’m in the store, just come on in.”

Glover said she’s looking forward to a bright future as she
pursues her passion full-time.

“My grandfather’s service station was on the back street,
and he would be so proud that his granddaughter now has a business on Palmer
Street. That just shows where we are today as a community.”

“I’m a little giddy,” she says. “I’m overjoyed now because
this is what I’ve always wanted to do.”