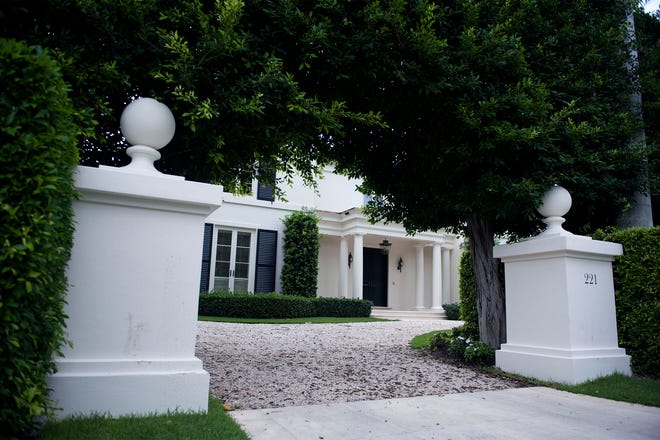 A custom home commissioned by an interior designer has changed hands in the lake block of El Vedado Road in the Estate Section of Palm Beach. The price reported Tuesday in the multiple listing service for the sale of 221 El Vedado Road was the same as the property’s asking price — $17.25 million.

The sale closed Friday, according to the sales listing updated Tuesday. The deed was still working its way through the recording process, so the buyer’s identity and the price that will be documented at the courthouse were not available.

Completed in 2014, the four-bedroom house and one-bedroom guesthouse have 7,819 square feet of living space, inside and out, property records show. The lot measures about four-tenths of an acre and lies about a half-mile south of Worth Avenue. The house is the second one west of South County Road.

Moran paid a reported $3.8 million for the property in 2011 and demolished a house there to accommodate her custom home.

With architecture influenced by Regency and British Colonial styles, the two-story house was designed by architects Mark Finlay and Jay Valade of Mark P. Finlay Architects in Southport, Connecticut.

They designed the house, in part, to accommodate visits by Moran’s children and grandchildren, she told Luxe magazine in a 2016 cover story.

“The interior is meant to be comfortable, elegantly sophisticated, not trendy and, most importantly, a home where family and friends can truly relax,” Moran told the magazine.

The house features limestone and hardwood floors, a paneled library with a fireplace, a formal dining room and a VIP guest suite on the ground floor, according to the sales description. The kitchen is adjacent to the breakfast room and the family room.

With a fireplace, the formal living room has French doors that open onto a pergola-covered loggia by the pool. The guesthouse is attached to the two-car garage.

The house on El Vedado was built by contractor Jim Woolems of Woolems Inc. with the grounds designed by landscape architect John E. Lang of Lang Design Group, records show.

She previously owned a house at 227 Miraflores Drive across town on the North End. She bought that property in 2003 with her late husband, J. Brian Moran, who died in 2008. She sold that house in 2013, property records show.

When she purchased the property on El Vedado Road, Moran was represented by agent Tierney O’Hara, who is today with Sotheby’s International Realty but at the time was affiliated with Mirsky Cole Real Estate, which later became part of Keyes Co.

In the 2011 sale, Angle acted on behalf of the seller, LuAnn Goode. Goode’s late mother, Marjorie Ellen Cloud, had bought the previous house on the property with her late husband, Harold A. Cloud, in 1990, records show. Goode sold the house after Marjorie Cloud’s death in 2009.

This is a developing story. Check back for updates.