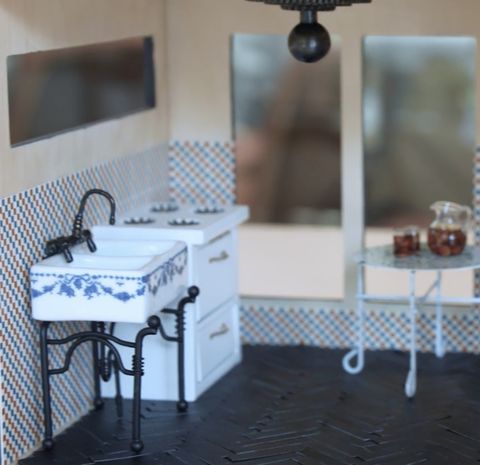 Good news, miniature lovers! Dollhouse Beautiful is back for Season 2. This time, House Beautiful gave six California designers the same midcentury modern dollhouse and $500 to decorate it any way they wanted. A whole lot of Krazy Glue, DIY accents, and miniature accessories later, we present Dollhouse Beautiful. Tune in every Tuesday for a new episode and to see how each designer created their miniature masterpiece.

Chloe Warner, founder of Oakland-based Redmond Aldrich, is known for her richly layered interiors. And when it came to designing a miniature one for Dollhouse Beautiful, Warner didn’t hold back—in fact, she went even (metaphorically) bigger. “My inspiration for this house was everything that I always want to use, but never get permission to use,” laughs the designer. Without a client, she points out, “I didn’t have to compromise or get any budget estimates or ask for approval. I just did whatever I wanted to do.”

And what, exactly, does that entail? “I have a large scale, de Gournay-inspired mural. I have leather floors. I have a custom mosaic,” Warner lists. “I have all of these things that if it were a real house, it would have been a negotiation, and instead I just got to go for it.”

Where the dollhouse did align with her typical projects was in design process: “My design process for the dollhouse is identical to my design process with a real house,” says Warner. “It starts with just a real love of layering pattern, texture and color. I felt inhibited by what is available in the dollhouse market, so I used real wallpapers and fabrics and samples that I would use on a regular house, but I was able to scale them down and print them on interesting paper so they would be my wallpapers.”

Plus, she says, “I definitely didn’t want everything to just be paper and dollhouse material, so I have leather and wool and Lucite”—all elements she might spec for a real home.

See how it all came together below!

“There’ve been so many last minute changes,” Warner says of the final design. “I didn’t realize how a dollhouse is never done—you think you’re finished, but then you buy something, you buy four linear inches of miniature dollhouse books because they’re better than the ones you had, and then you’re swapping them out at the last minute.”

One necessity-borne change to Warner’s house came in the kitchen: “My miniature AGA didn’t arrive in time, and so my office has just been pulling out all the stops, trying to make a kitchen that wasn’t centered around this AGA,” she says. “It was some late nights and more trips to Michael’s and Hobby Lobby than I’m really interested in moving forward.” But, with some hot glue, ingenuity, a porcelain basin, and a very cool leather herringbone floor, it all came together perfectly.

“This Walton Ford painting I’ve never seen in real life, but it’s really bringing the heat to the sitting area,” says Warner. Sourcing details like this (and the Lucite block it’s paired with) were the fun part of the project, she says: “When we first started, I had some very rigid ideas about how the dollhouse was going to go, and I thought that I needed to include every single room that is in a house, such as a bathroom and a kitchen,” recalls the designer. “And then I also tried to lay it all out in CAD to begin with, and it just got a hundred times more fun once I just started buying little pieces and putting them in.”

“I think the most challenging part was I really didn’t want any fabrics or wall coverings to look out of scale,” says Warner. “And so there were things that I wanted to use that looked great, felt great, went with other pieces in a certain room, but maybe they were too puffy or I put a border on them and they just started to look like a blanket instead of a carpet.”

In the dining room, Warner topped a miniature table and bent-wire chairs with tiny tapered candles—complete with real wicks!—and opted for a flat weave rug. A miniature chandelier and abstract painting complete the look.

“Impactful details is the theme of the house,” Warner says. “I actually hate when designers are like, ‘Oh, I’m going to use a pop of color.’ If you use one pop of color, everyone’s going to hate it in three months. The key is to use seven pops of something.”

Take the dollhouse bedroom, for example, where a bed covered in a Decores Barbares fabric pairs with an equally bold wallpaper. “It’s not just a wallpaper, it’s the perfect wallpaper,” says Warner of the pattern, from her “favorite wallpaper maker,” Parisian company Antoinette Poisson.

“It has been scaled down to work here. And then I printed it on this beautiful stock, so it is just so perfect. And then I picked another beautiful fabric for the bed and we have puffy pillows and a perfect little rug. So it’s like not any room is hinging on one detail. They’re all hinging on quite a lot of details, but that’s the way we do things and that’s why it’s fun.”

On the terrace, a miniature fire pit and sculptural modern chair rest atop a “tile” pattern Warner painstakingly laid herself. “I was at the Hobby Lobby and I saw this unbelievable craft product where it’s these tiny glass beads and you apply them in a mosaic pattern,” she recalls. “And it occurred to me that I could make a carpet of these glass beads with a Greek key pattern, and it would be perfectly sized to my dollhouse.”

“I 100 percent bit off more than I can chew,” she admits: “I didn’t know how long it would take. But it was super fun. And then in every single room, I realized needed something that was very labor intensive, creative, made by hand—that felt artistic and special.”

Instead of opting for a separate bathroom, Warner set a tub in the loft of the double-height library. “I don’t think I would have done that had I not been reading a nonfiction book about Winston Churchill, who famously took meetings in the tub,” she quips. “I thought I would combine bathing with intellectual pursuits in this double-height area.”

“The most difficult part of the install was my bookshelf wall,” says Warner. “I for sure measured twice, and I had actually made these bookshelves twice—once in a slightly larger scale and then once in a scale that was perfect.”

But, as with any install, things can go wrong day-of: “I just eyeballed the installation of that first shelf, which I thought would be perfect because I was aligning it on a door. But then the hot glue just froze and it looked cocked, and I was stressed out!”

But Warner made it work: “I got a razorblade, we put in some new little cornices, we found a miniature level in the office because that’s what kind of office this place is, and now it looks perfect.”

This content is created and maintained by a third party, and imported onto this page to help users provide their email addresses. You may be able to find more information about this and similar content at piano.io