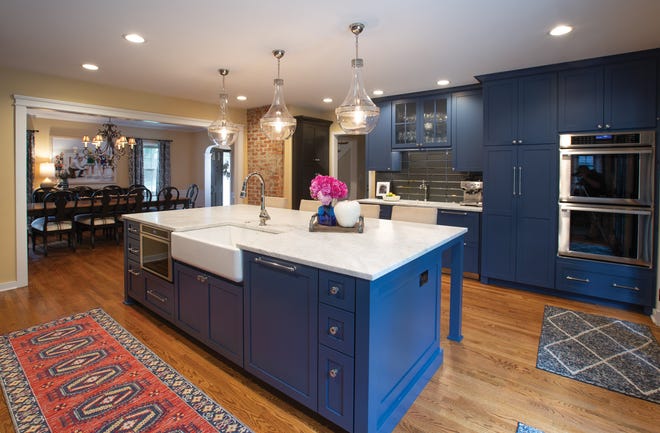 For Sam Hooper and Michelle Holdgreve, 2016 was a year of change. They had lived in their 1948 colonial revival Cape Cod in the lush Medick Estates enclave of Worthington for two years. Their son, Henry, was heading to kindergarten. They anticipated staying put for a while.

“The previous owners had been here since 1968, so it was covered in wallpaper,” says Michelle. “But you could tell that it had great bones. The scale of the home was really nice.”

With a growing boy and a good-sized goldendoodle, Mudge, they felt they needed more space. They also wanted to modernize the home’s dated features. They linked up with architect Jamee Parish for the project.

“We had ideas, and we each independently sat down and wrote down what we wanted,” Michelle says. They presented their wish lists to Parish, who mocked up several concepts.

Preserving the character of the home was nonnegotiable. “I didn’t want to just add space, like a box to the back. We wanted it to be seamless to the house,” says Michelle. “Sometimes you can just walk into a house where there’s been an addition and see the line—that was something we were absolutely against.”

Parish would have to get creative.

From start to finish, the project took eight months, beginning in December 2017. During this time, the family packed up and moved to an apartment. “When we got talking about what things were bothering them about their house, the kitchen came up first,” Parish says. “The kitchen was very small and outdated. We wanted to make it functional, but still provide a walkway space to get to and from the screened porch to the dining room.”

Today, the kitchen is unrecognizable from photos taken prior to its renovation, with red cabinetry, bird-print tile and linoleum flooring.

Michelle, who likes to cook, requested a serious cooktop area, and Sam, the mixologist of the two, wanted a wet bar.

When it came to cabinets, Michelle was adamant for more. “Coming from a tiny Clintonville kitchen and really unfunctional kitchen here, I said, ‘I’m going to be a pig,’” Michelle says. “I said, ‘I want all the cabinets on all the walls.’”

Opposite walls now feature floor-to-ceiling cobalt cabinets, some exposed to show stemware, and others hidden underneath the island. Parish reassured the couple that they’d have plenty of cabinet space.

“I think we still have to keep a few things in the basement,” Sam says, laughing.

To make room for Sam’s wet bar, they removed an original shower, transforming a full bath off the foyer into a modern powder room.

One surprise came when Parish discovered that the original furnace chase offered an opportunity to showcase a modern, exposed-brick accent.

“We were surprised that there was brick there and not cinder block,” says Sam. “We knew that we had to design the kitchen around the chase, otherwise we would have had to tear it all out and remove the furnace.”

Parish suggested they keep it. “It’s cool seeing the polished formal look over at the wet bar, which is a complete contrast to the rough brick,” she says. “It was a cool find that we made work.”

The couple leaned on Jan Cahill, owner of Classico Tile & Marble in Grandview, for tile selection. “I told him I wanted a white, subway-tile backsplash with some texture in it,” Michelle says. “The sample he pulled had the tiles going the other direction, but he told us to flip it.”

He also recommended the wet bar tile, a dark gray outlined in reflective glass, installed horizontally to contrast the white tile on the opposite wall.

Original hardwood in the guest room gave the inspiration for the new kitchen flooring.

“[The contractor] tested the wood to tell if it’s red oak or white oak, and they were able to identify that it was mixed,” says Sam.

The guest room, foyer, kitchen and dining room now feature the mixed hardwood that flows seamlessly from room to room.

They talked about an additional living space, Parish says. “But after the conversations, we determined that they already had a big living space. They wanted to be more connected to the outdoors.”

“This is almost a four-season room for us, now that we’ve added the heaters,” Sam says. During the COVID-19 pandemic, they added overhead electric heaters to make the space functional even during cold weather months.

Parish also persuaded the couple to cover the screened-in breezeway to make it a functional mudroom, especially since they have a dog. Michelle selected a whimsical bird wallpaper, and the couple saved an original Dutch door, which now connects the mudroom to the kitchen.

For interest, the tile was installed in a unique horizontal pattern. Because the space is long and narrow, “[Cahill] told us to run it in a V-shaped design to give it depth,” Michelle says.

In the back of the house, Michelle now has a sitting area, which she calls the “lady lounge,” with a TV, a gaming console for Henry and a small office nook.

For the exterior, Parish says, “I decided to put board and batten on the mudroom entry, just to make it look a little bit different from the garage and the main house.”

She wanted to feature the original stone already on the house, while adding brighter accents. “We picked a rich warm color that would complement the stone,” she says.

“While the project had its challenges as most home renovations do, we’re thrilled with the end result,” says Sam. “ With the great design from Jamee and exceptional craftsmanship from Sullivan Builders, we were able to take a great house and make it so much better for our family. Would we do it again?  Absolutely!”

This story is from the August 2021 issue of Columbus Monthly.